It’s the start of December meaning it’s time for a monthly blog update! I apologize for the length. As a token of my appreciation, I’ve included more pics than usual.

I played a little less than 10k hands this month (mostly trying to clear a bonus I describe later in the blog). I’m really starting to love LHE again so I’m pretty excited about that. I’ve recently begun participating a bit more in the 2p2 forums and have been watching more LHE vids on CardRunners/StoxPoker/DeucesCracked. Here is a [swingy] graph of the month: 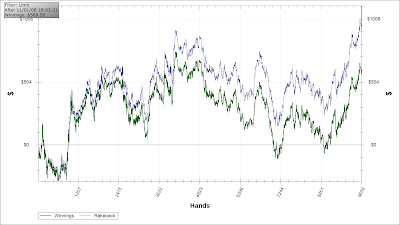 and here are my stats:

I ran pretty hot in the 5/10 hands I played but pretty poorly in the 2/4 and 3/6 hands. That’s the ideal situation if I have to run bad somewhere though 😛 I played a pretty LAGgy style, 34/24, which seems to be becoming my norm. I’m okay with this (and I actually like it more as I get to play more hands). However, playing this style requires more focus and that’s one of the leaks I need to work on. I’ve spotted some other leaks in my game (looking over my stats recently) and I’m going to try to fix them soon. I’m pretty excited about this because I think I’ll have a really good winrate if I fix the known leaks (and then rinse and repeat, finding more)!

I didn’t play too many tournaments in November (60-some). There was mostly one day which I dedicated to tournaments (maybe part of the long Thanksgiving weekend). It started off horribly where I couldn’t win at all then went on a sick rush after a streak of 17 no-cashes where I final tabled 5 of them (only 45- and 90-mans) and won 3 of them (two 90’s and a 45). I ended up about +$1k on the day but didn’t run so hot in any other tourneys I played. Below are the graph and stats from Poker Academy Prospector 2 although I think it’s missing a few tourneys for some reason (OPR has a few more recorded and as a break-even month overall). 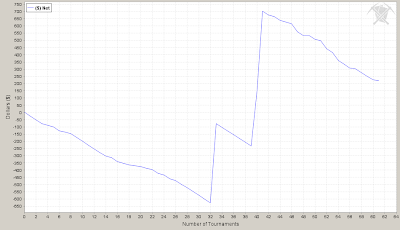 and here are the MTT stats for the month: 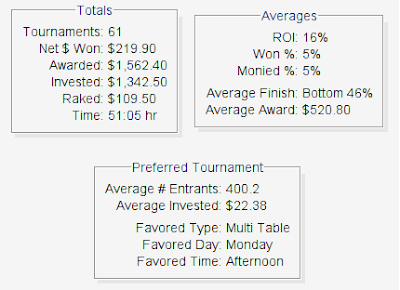 I transferred $100 of rakeback money onto my old Party Poker account to try out the new software. I actually like the software a decent amount although the HUD doesn’t seem to work properly for preferred seating yet. I might consider transferring more money there at some point (so I can actually play more sizeable stakes). After LHE cash, MTTs, and rakeback, I ended up profiting ~$1250 with ~40 hours of play.

Wired Magazine was originally going to write an article about the Second Man vs. Machine Competition we ran in Vegas this summer but instead decided to do a 6-page comic book spread describing a tiny bit of our technology and an epic J5o vs. 22 hand. Click here to check it out (and each of the 6 pages can be accessed at the top of the link). A hard-copy can also be found in the new December issue of Wired.

I think one of the main reasons I haven’t been playing as much poker as I used to is because I get bored of it and don’t have many exciting poker goals to motivate me. One promotion which excited me a little and gave me an incentive to put in more cash game hands is Truly Free Poker Training. Basically, if you accumulate enough points in a month, you can get subscriptions to CardRunners and StoxPoker for free. The awesome thing is that there isn’t a catch at all, it doesn’t take away from rakeback! I need 7.5k FTPoints to get a free month at both StoxPoker and CardRunners. I ended up clearing this bonus last month and would like to do it every month if possible. I think it’s crazy that a $20 or $30 membership can give me an incentive to play (especially when daily swings are sometimes $500+).

I recently got a headset so that I can record poker sessions (as I’d like to eventually get some coaching). I also downloaded the 30-day trial of Camtasia Studio 6 (new!) which is pretty awesome. If I do decide to get coaching, I’ll probably buy the software. There is a free program called CamStudio but it has less functionality, isn’t as user-friendly, and seems to crash more.

My Master’s is going much better now. I’ve finished most of my boring changes to the code-base and we finally have direction for the project. I’ll be working on multiplayer situations which turn into heads-up situations. For instance, imagine a 3-handed game where the BTN folds leaving two players left. However, we can’t just model it as a 2-player game with random hands, we have to take into account card removal effects. That’s a little glimpse into what I’m working on now, anyway.

I kind of rekindled the “Robustness” program/tool I was writing a while ago. I decided to model the new program after some spreadsheets that Eric “Sheets” Haber created for subscribers of PokerXFactor.

Here is a screenshot of the spreadsheet I based the program on: 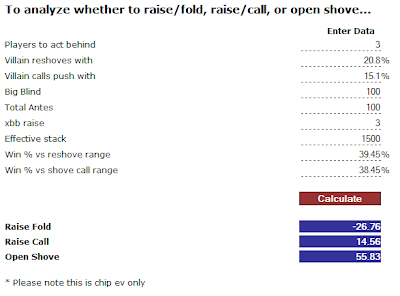 and here is my program: 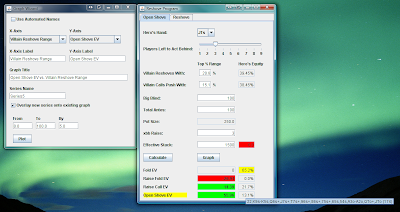 Notice that we obtain the same EVs as Sheets’ spreadsheet (within rounding error) under the same conditions:

Some things not included in his spreadsheet which I’ve added are: 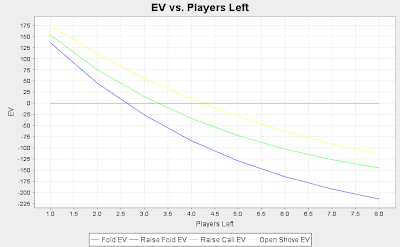 From the graph above (EV on the y-axis, Players Left on the x-axis) we can see that: 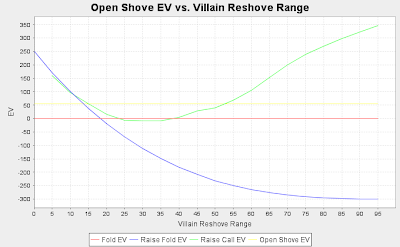 From the graph above (EV on the y-axis, Villain “Top X%” reshove range on the x-axis) we see that:

There is a huge list of things I wanted to add or change with the program (both on the inner- and outer-surface). Some of these include:

Melissa and I are going to be on PEI from Dec. 16 to Jan 4. I can’t wait! I still need to get most of my Xmas shopping done (but that’s usually the case every year at this time). We’ll be doing a ton of relaxing and visiting. I also hope to get a picture with Santa (along with my brother and old roommate Nick). This has become a Christmas tradition for us (not because we really want to see Santa but because it’s funny and likely uncomfortable for the guy working in the mall).

Last month, I set a goal to play 25k hands and only played about half that many (3.5k of which was MTT hands). I also set a goal to analyze all of my marked HoldemManager hands but didn’t get any of them analyzed. This is something I really need to start working on and I think would be much more useful than experience gained by playing (assuming a decent grasp on ranges already).

Thanks for reading and good luck at the tables!
– Nick