Well, I won the tourney a little over two months ago but haven’t updated my blog… as usual.  Here’s a photo from shortly after it finished: 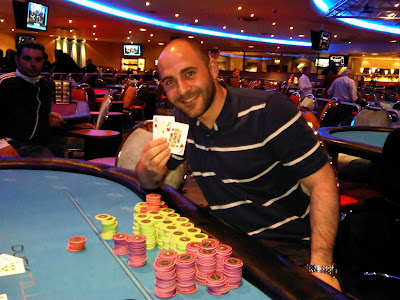 Two friends from work and I went to Nottingham, England for the weekend to play the Dusk Till Dawn monthly (£300+36).  This was  a 2-day event which I ended up busting from on the first day (I played my bustout hand pretty bad…).  The next day, I was planning on playing the Sunday Million from the hotel room but decided to go back into the cardroom to play a 1-day £150+18 tourney with the guys.  We took a cab to the cardroom and little did I know that they have strict rules about attire… I wore beige cargo shorts and they would not let me in.  I had to take a cab back to the hotel, put pants on, take a cab back to the cardroom, and ended up missing the first level or so of the tourney.

It was pretty fun to play a live tournament because you can acquire so much more information.  On the flip side, I’m sure I gave away *lots* of information.  Fortunately, most of the players weren’t at a level to pick up on my tells and exploit me.  I also made quite a few slip-ups at the table including this really weird spot:

Anyway, long story short: I ran pretty good in the middle of the tournament (picking up some big pocket pairs with raises or shoves in front of me) and probably hovered around the chip lead for a while.  I mostly maintained my stack until close to the final table at which point I started to make some plays in pretty good situations.  By the time we got to the final table, I was probably around average stack but that was only ~10-15 BBs.  I ended up shoving 98s from early position with an M of 9 or so and sucking out on KK :D.  After I won that pot, I feel like I really ran over the final table.  I was by far the most active and aggressive player and got to steal lots of pots.  However, I did win a super-critical interesting 3-way all-in:

Anyway, we ended up getting down to heads-up with £7k for first and £4k for second.  I was up against a nice young aggro kid that I talked to throughout the tourney.  Actually, we spoke on break before the final table and he was talking about how much the final table money meant to him.  I now had my friends from work railing me (along with a friend of a friend who chopped the £300+36 tourney 4-ways for about £12,000, not bad!).   My opponent immediately asked if I wanted to make a deal (just chop it based on chip stacks).   I knew how much the money meant to him and felt like I had a skill advantage so I declined.  With the help of my friends, I did offer him a deal were I would get more than my fair share.  He seemed pretty offended that I thought I had a skill edge and declined.  The next hand:

They added my name and result to the Hendon Mob live poker tournament database.

Well, I’ve gotta wake up in 3.5 hours as we’re flying out tomorrow morning as I’ll be playing the 3-day £500+50 UKIPT Edinburgh poker tourney in Scotland.  Wish me luck!

Thanks for reading,
Nick