Again, click here for a link to my old poker blog posts (hosted by Cardrunners). This month (September) ended up being by far my worst month of poker ever. It’s a little discouraging especially after having such a great August and naturally having high hopes for September.

Again, I didn’t really play much cash this month. I played a very short 2/4 HU LHE session and a small amount of 5/10 6max LHE. I ended up running really hot and making over $400 in 2.5 hours. Trust me, if I could make over $170/hr (plus rakeback) every day, I’d definitely be playing more cash. Here’s a PT3 pic of the month: 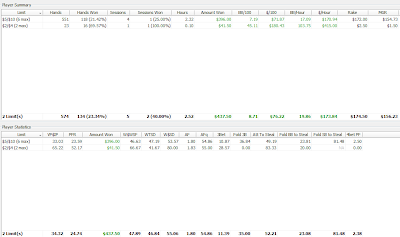 Nothing too special about the stats, I don’t think. I played 33/23.5/1.8 which seems around standard for me. I think 47% WTSD seems pretty high even for me (of course I’m a showdown monkey). My “Attempt to Steal” was ~50% which seems on the high side but fine as long as the blinds aren’t super tough. My “Fold BB to steal” was 24% so I defended by BB over 3/4 of the time (I think that’s about standard for me).

After playing close to 200 MTTs over September, I made only two final tables (not counting SNG MTTs). Here are the PXF replays of them:

It was definitely a very tough month to swallow MTT-wise. I started the month with lots of confidence from last month’s results. I think playing MTTs successfully depends a ton on high confidence. However, nothing ever seemed to really work out late in tourneys. I got to at least the final two tables of the Big Double A four times (6th, 10th, 14th, 18th) and got pretty unlucky in them all (wouldn’t have changed anything). The 6th was a fun tournament because I got to play the final two tables with NEONPILS99, an 18 year old superstar from BC (He’s currently ranked 1st in Canada and 12th in the world on Pocketfives). He pretty much pwned and I was amazed at his aggressive finesse (along with running very well). I ended up busting when I shoved 7.5x UTG with AQo and he woke up with AKo on the button. I also had two deep runs in the Midnight Madness (26th and 44th) along with two deep runs in the in the $75 $23k KO gtd (11th with AA and 17th). I busted on the second hand of my other FT:

Aside from it being a somewhat loose, but definitely not horrible, raise from EP, I don’t regret my play at all. On the turn, he can so often have {a weaker Q, a smaller PP, a combo draw (like pair + gutshot), a FD, or simply air} that I think it’s definitely a value shove.

Anyway, having one more key hand go my way late in a tourney could make the difference between my worst losing month ever and a profitable month. That said, I don’t regret my overall play too much except for two key spots. One was in the 11r, I was one of the big stacks and the CL raised in EP (to a standard raise size), I decided to shove 88 from the BTN or so for 10x his raise. Against someone who can raise light (i.e. raise/fold more often than normal), I’m pretty sure this is a standard shove but considering the circumstances, I think I should have just called and played safely postflop. The reason is because if he calls and I lose, I’m out of the tournament (this was with 19 players left). Normally, I’m the last person to consider “tournament life” and think it’s generally over-rated (by live players at least) but in this spot, I was able to accumulate chips with little risk due to table conditions. The other play I’m unsure of is in the Turbo Fiddy, we were down to the last 30 or so, and again I was one of the big stacks and again the CL raises from EP and again I have ~10x his raise. This time I ended up having AQo and decided to shove on the CL because he’d been quite active for the few hands I saw. I plan on analyzing the hand using StoxEV to find out what I should have done based on my assumption about his ranges for possible actions.

Here’s the [very very ugly] graph of the month: 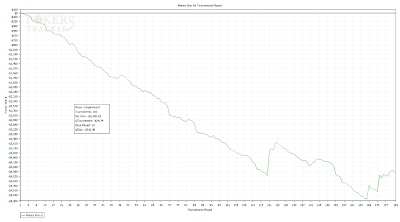 And here’s a graph of my MTTs since May or so (it doesn’t look AS bad in comparison…): 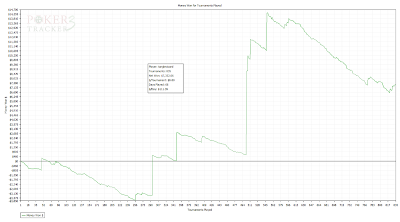 Here are some links to sites that keep track of MTT stats (with rankings in brackets):

So I made a withdrawal of a little over $2100 (which brings my total withdrawals to over 10k). That said, assuming you know how to do simple arithmetic, you can determine how bad my worst month was using these numbers and last month’s bankroll. Ugghhhh!

I haven’t worked on that preflop holdem program any more but I plan to get around to that soon. I really want to start analyzing 3betting/reshoving for MTT scenarios (I could use StoxEV to analyze it, but it wouldn’t be as convenient).

I picked up two poker books this month:

The first book seems really good (I believe I mentioned it in a previous post). It’s written by 3 online pros and consists entirely of them reviewing hands they played. You get to see why they made the decisions they made at the time (along with the factors that go into their decision-making) along with regrets they had and how they might have played it differently after the fact. Melissa got me the second book from her work.

Some of the books I’d like to get are:

I decided it was probably a good idea to post leaks that I discover or changes that I plan to make to improve my game: 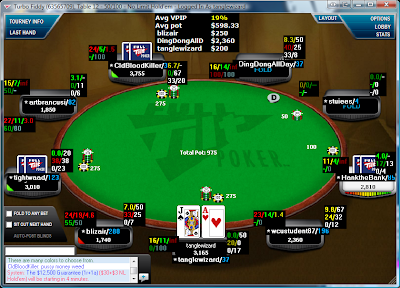 The stats I currently have on the HUD are:

I’ve decided that I want to cut back on the amount of MTTs that I play. The reason for this is that when you grind tournaments, you are pretty much bound by them, you have to keep playing until they finish and never really get a break (sure, you get 4 min. breaks every once in a while, but if you are playing several tables, you never really get a break). Also, if you start some of the late night tourneys and actually go deep in them, you are often up until 2 or 3. This just doesn’t work (esp. when I have to be at the university every weekday). I think grinding out MTTs is generally just unhealthy for you (physically and mentally) esp. if you have a job/school. So… the plan is currently to primarily play cash games (probably 6max LHE) on weeknights and to play MTTs on the weekends. Playing SNGs (such as 45-, 90-, and 180-mans on weeknights would be fine). The beautiful thing about cash games is that you can come and go as you please and can choose your opposition (at least moreso than in MTTs).

I find that I often perform much better when I have a goal to aim for. So, I’ve decided to set a few goals for myself (to attain by Christmas):

Well, I finally got around to getting a TV that was larger than 13″. With some of the money I withdrew this month, I purchased an LG 37″ LCD HDTV and an HD DVD player. It’s kind of funny because I don’t really watch TV at all. However, I figured it was worth it because Melissa watches a bunch of TV, we could watch our movies on it, my friends could play video games on it when they come over (instead of bringing out my 22″ monitor to play on, LOL).

Aside from that, I have a few goals for RL as well:

Like I said earlier, MTTs aren’t very healthy for you and I’d like to get into better shape. I’ve already lost a little weight over the past few months (or so the Wii Fit tells me). This is probably because of softball, squash, and walking to school. However, walking to school and back on weekdays and playing squash twice a week isn’t enough. I plan to start using the fitness room in our new apartment building and/or start playing more DDR/Wii Fit. I also think having a better sleep schedule and actually eating breakfast and healthier dinners will help a lot. Wish me luck!